We can’t just claim that fRPC is faster than a battle-tested tool like gRPC without backing it up with an apples-to-apples comparison. These benchmarks are publicly available at https://github.com/loopholelabs/frpc-go-benchmarks, and we encourage you to run them for yourselves.

We’ll be running a number of different benchmarks with an increasing number of concurrent clients to show off both the throughput and the scalability of fRPC when compared to gRPC.

For our first set of benchmarks we’ll have a number of concurrently connected clients and each client will make RPCs to the fRPC or gRPC server using a randomly generated fixed-sized message, and then wait for a response before repeating.

In each of our benchmark runs we’re increasing the number of concurrently connected clients and we’re measuring the average throughput of each client to see how well fRPC and gRPC scale. We’re also running a number of separate benchmarks, each with an increasing message size. 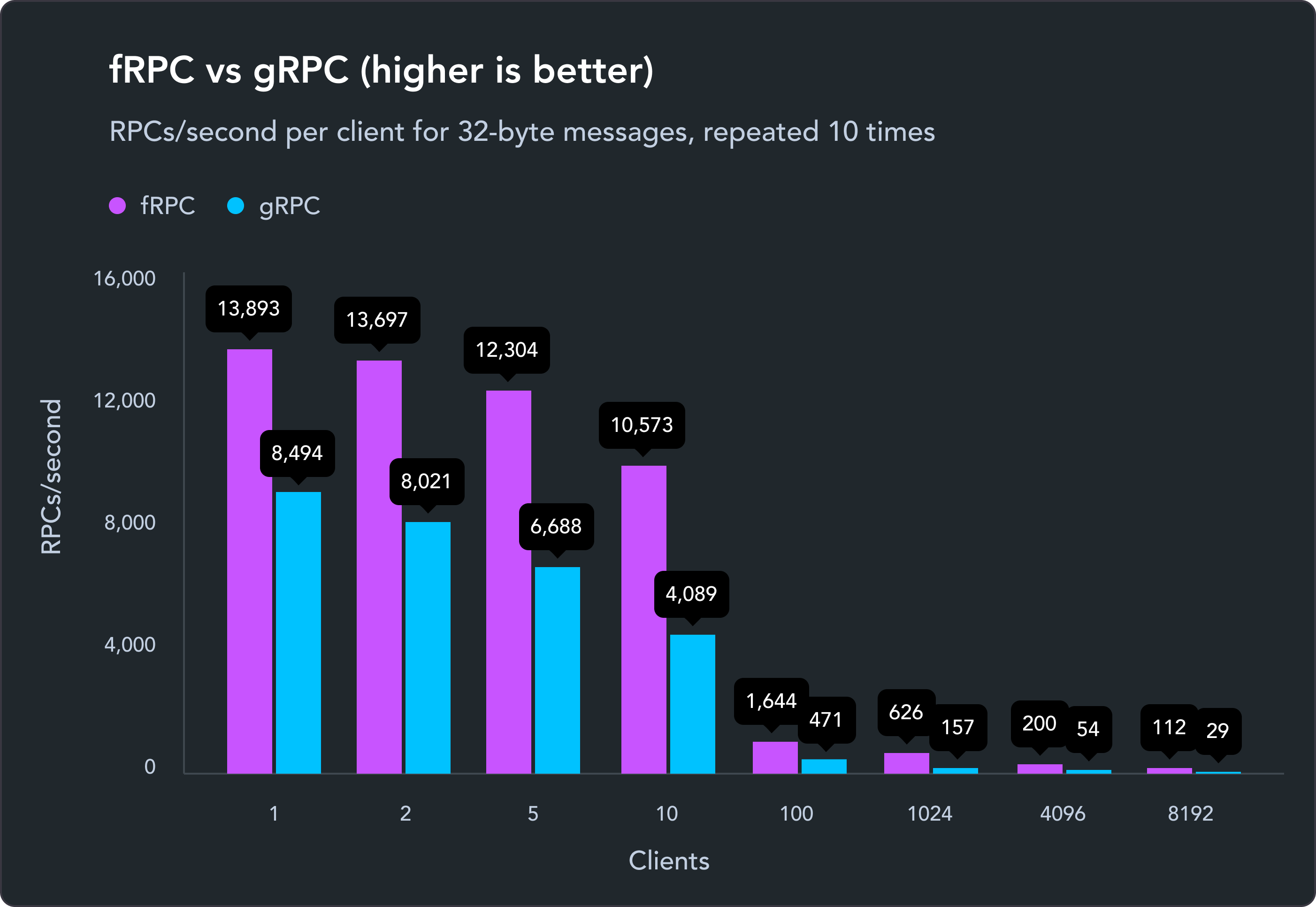 Starting with 32-byte messages, it’s obvious from the graph above that fRPC consistently outperforms and outscales gRPC - often by more than 2x. In the case of 8192 connected clients, fRPC’s throughput is still 112 RPCs/second while gRPC drops to only 29.

That means that clients using fRPC get almost 4x more throughput than gRPC using the same services and the same proto3 files.

Moving to the slightly larger 512-byte messages, we can see the total throughput seems to drop for each individual client, but fRPC is still comfortably 2-3x faster than gRPC is. In the case of 8192 connected clients, fRPC’s throughput is still 98 RPCs/second while gRPC drops to only 29.

Now we’re moving to the next larger message size, 128-KB. Total throughput drops as expected for each client, but fRPC is still easily 3-4x faster than gRPC. In the case of 100 connected clients, fRPC’s throughput is 192 RPCs/second while gRPC drops to only 65.

With the next largest message size, 1MB, it’s clear that we’re starting to become bottlenecked by the bare metal host we’re using to benchmark.

Now let’s look at how fRPC servers scale as we increase the number of connected clients. For this benchmark, we’re going to make it so that each client repeatedly sends 10 concurrent RPCs in order to saturate the underlying TCP connections and the accompanying RPC server. 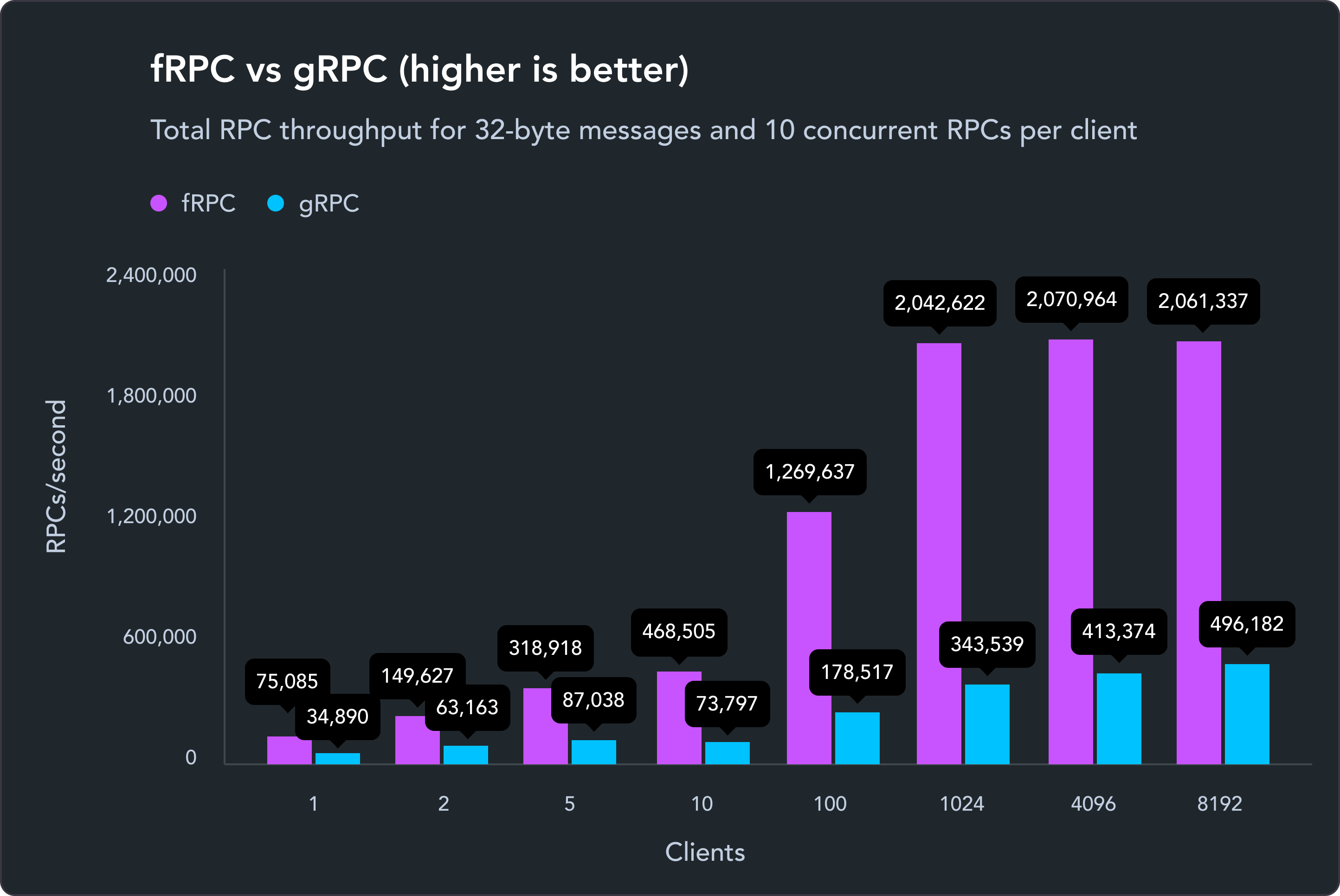 As before, we can see that fRPC consistently outperforms gRPC - but as we increase the number of clients it’s also clear that fRPC does not get as slowed down as the gRPC server does. It’s able to handle more than 2,000,000 RPCs/second and the bottleneck actually seems to be our bare metal host as opposed to fRPC.

In the case where we have 8192 connected clients, we can see that the gRPC server is able to handle just less than 500,000 RPCs/second - whereas fRPC can easily handle more than 4x that.

By default, fRPC creates a new goroutine for each incoming RPC. This is a very similar approach to the one used by gRPC, and is a good choice for high-throughput applications where handling the RPC can be a blocking operation (like querying a remote database).

However, fRPC can also be configured to create a single goroutine to handle all the RPCs from each incoming connection. This is a good choice for applications that require very low latency and where the handlers are not blocking operations (such as metrics streaming).

The benchmarks above were all run with the single-goroutine option enabled, because our BenchmarkService implementation is a simple Echo service that does little to no processing and does not block.

It’s also important, however, to benchmark an application where the RPCs are blocking operations - and for those we’ll go back to fRPCs default behavior to create a new goroutine to handle each incoming RPC.

Our blocking operation for the following benchmark is a simple time.Sleep call that sleeps for exactly 50 Microseconds. 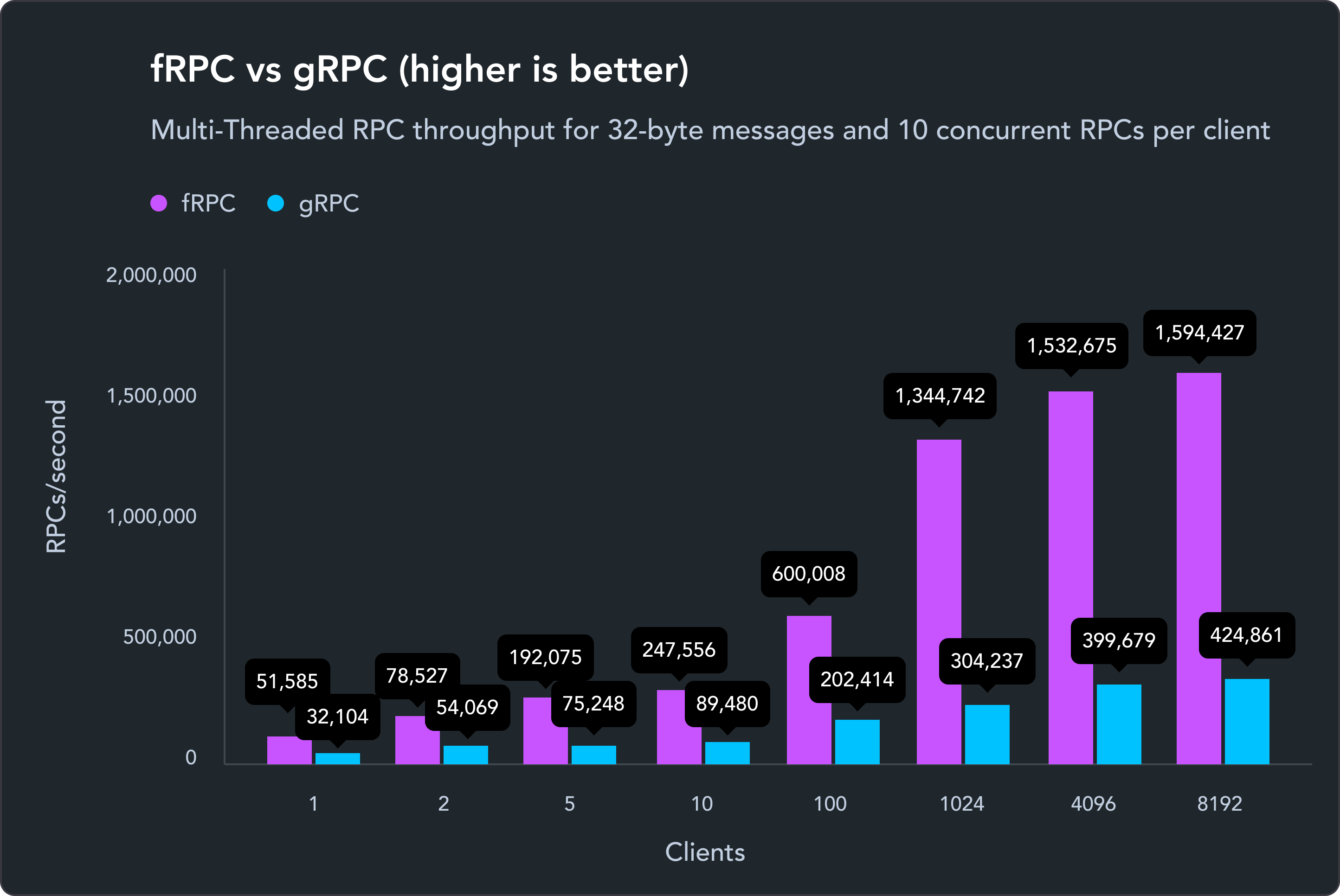 The trend above is very similar to the single-threaded benchmarks above - fRPC is still leading gRPC in throughput, but it’s also clear that boht gRPC and fRPC have suffered a performance penalty. For gRPC this is likely because the RPCs are now doing “work” and are blocking operations, but for fRPC it’s a mixture of the added computation as well as the multi-threaded behaviour.

These benchmarks show off just a small portion of fRPCs capabilities, and we encourage everyone to run these for themselves. We also have benchmarks comparing fRPCs messaging format with protobuf and other serialization frameworks.